The Complete Guide to Increasing Conversions Through Instagram Micro-Influencers 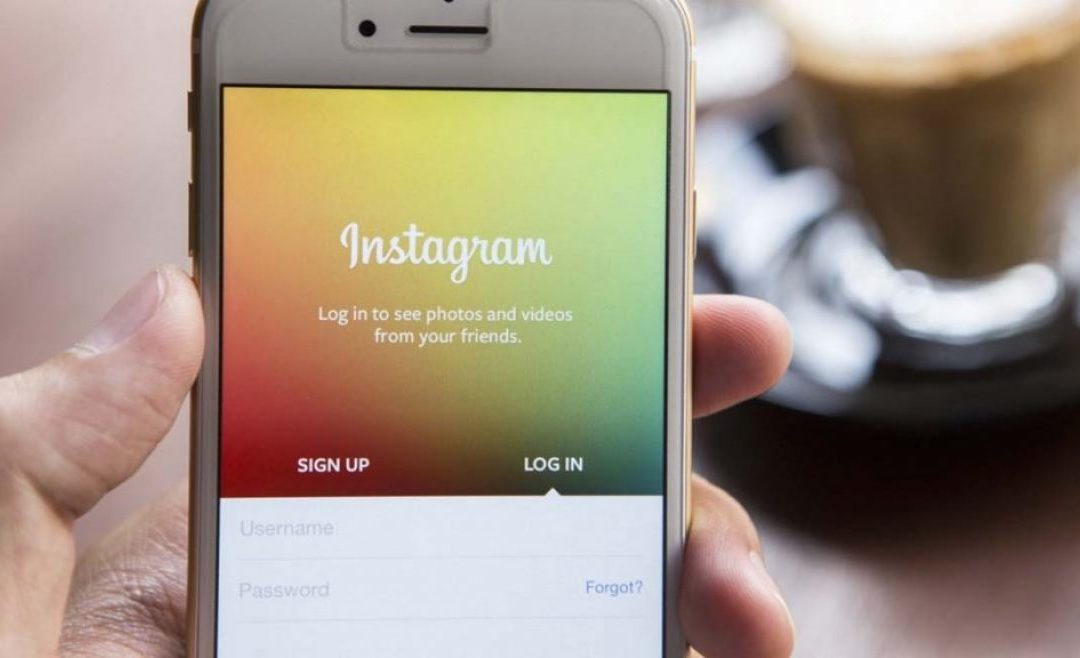 Influencers are crucial elements to marketing campaigns today. This causes us to believe that the larger, more popular influencers should be our primary targets when planning a social media marketing strategy. However, that isn’t always the case, especially if you’re a fledgling online enterprise.

At the low end, this does not sound like a lot of followers, but keep in mind that their followers are more engaged and invested in what their influencer has to say.

Obviously, celebrities who have lent their names and likenesses to endorse brands and sell products may have millions of followers. However, this does not mean that their followers are tuned in to their message. Moreover, is it safe to assume that celebrities have actual expertise in, let alone connection with, whatever it is they happen to endorse?

In fact, endorsements by celebrities and social media stars tend to have underwhelming results, compared with regular advertisements that have no celebrity involvement whatsoever.

Perception is key, and when audiences perceive authenticity, they pay attention.

Micro-influencers aren’t executives, journalists or even bloggers. In comparison to these individuals as well as celebrities, they have the smallest reach. But they have the most favorable numbers where it matters: highest engagement reach, lowest cost per activation, and at upwards of 40 million, the largest population group from which to recruit.

The good news is that we have established a sweet spot in terms of predictability and expectations for Instagram micro-influencers.

A recent study of about 800 thousand Instagram users with at least 1000 followers shows that as the number of followers increases, the engagement rate decreases. Instagram users with fewer than 1000 followers receive likes on their posts 8% of the time, whereas 1.6% for those with over 10 million followers. Comment rates show a correlative disparity – 0.5% versus 0.04%, or about 13 times as much engagement for the micros.

Micro-influencers can garner as much as 25 percent engagement on their content, far more than what celebrities can accomplish, and at a minimum in terms of cost.

It would be disingenuous at best to assume that audiences buy into whatever comes out of the mouths of celebrities. And professional bloggers, journalists and social media stars, though possibly sincere, are less relatable than their actual friends. Audiences prefer to follow authentic people whose lifestyles reflect their own.

For example, if one of your friends posts pictures on Instagram of a new kitchen appliance from a brand you’ve never heard of, would you take notice? This friend of yours is a talented and experienced cook—always posting recipes and pictures of food and kitchen gadgets online. You’ve even tried his cooking for yourself, and it’s excellent. You’re convinced he knows what he’s talking about. He likes this new product, which makes you interested as well.

The day after your friend posts his Instagram post, another mutual friend buys the same appliance. This is how micro-influencers work.

Celebrities and social media stars have millions of followers, which they often leverage to command high professional fees as endorsers. While they have their place in television, print or other media, for an influencer marketing campaign to build your brand, they’re not a good fit.

Micro-influencers are a passionate bunch, and they generate real conversions among their like-minded friends. They are also very easily motivated by VIP-like treatment, such as discounts, promotions and special offers, so you don’t need a large advertising budget to support them in your social media marketing campaign.

Employing micro-influencers isn’t a risk-free endeavor, as leverage can become an issue. Holding them contractually bound to promote your brand, or making them sign a long-term branding deal is more easily said than done.

Influencers regardless of magnitude can go off script at any point, or make simple yet costly mistakes, such as forgetting to include promotional material in their posts. Depending on your campaign, this can have a wide range of effects and consequences for your brand.

Always be sure to do proper screening of your potential influencers, checking their content and activity across various platforms, and have damage control measures on standby in case volatility and controversy become an issue.

2. It can take a lot of micro-influencers to have the reach that your brand needs.

Most brands turn their back on Micro-influencer Marketing because of one word: “micro”. Unlike known celebrities and huge influencers who have millions of reach among their number of followers, micro-influencers only have thousands. Thus, brands need more than one or two micro-influencers to achieve their target reach, which could drain your resources.

Coordinating with micro-influencers is an exercise in patience, diligence, organizational skills and politics.

Finding the right influencers, managing campaigns, and measuring the results takes time, effort, and resources. To find these individuals, you could use social media platforms yourself. However, keeping track of hashtags on Instagram is time consuming.

Instead, look towards influencer marketing platforms. These platforms allow you to search for influencers based on industry segment, engagement, and number of followers.

Available as software-as-a-service platforms, these tools can help simplify and even automate the tedious processes, freeing up time and energy to actually focus on campaign development.

Below is a checklist for the qualities you should be looking for when choosing and vetting the best micro-influencer for your business.

Relevance to your brand and campaign

Micro-influencers don’t have to be experts in your industry, your product line, or your campaign, but who they are and what they do must be relevant. Campaigns with relevant influencers are the ones that are most memorable for their audience, in the long run. This leads to more successful conversions.

When considering your micro-influencers, be sure to measure their reach. You may have an idea about the number of times you want your influencer to post about your brand, but not the effects. Find out how much your influencer achieves on a regular basis, the number of followers, likes, and comments, then calculate how much more you might need. Compare their reach with others to see how well they’re performing.

Aside from the numbers, also make time to check their followers to make sure if their profile correspond with the customer segments on your marketing plan.

You want to work with influencers who have a positive perception around them. The influencer’s perception can easily rub off onto your brand. People who are embroiled in highly publicized legal troubles, or have been disliked on social media, or are generally polarizing figures are not safe bets. You want your campaign to be viral for the right reasons.

There are two kinds of engagement you should be looking for. The first measures how engaged the influencer is online, interacting with other users, and the depth of these engagements. The second is how much engagement they get as a result of the content they publish, and the overall sentiment of that engagement. This helps you anticipate what kinds of feedback you can expect by bringing them on board to help with your campaign.

As mentioned above, the influencer is engaged, but take note of the tone and quality of their content. Does it seem compatible to your campaign goals? If they’ve mentioned your brand in a negative light in the past, would sponsoring you to the same audience be a good idea?

Is the influencer affiliated with a different brand, or has demonstrated an affinity for your competitors? Be sure not only to check the influencer’s posts, but also search the competition to see if there’s any affiliations that might work against you.

How To Find Influencers

We’ve discussed a number of ways to track down these valuable individuals, so this is just a quick summary of tools to use:

How To Work With Influencers

The first step to working with influencers is to thank them for coming on board. As it is with any new paid staff or contractual hire, from this point forward, you have a professional relationship with them, so treat them as partners.

You don’t have the leverage to put words in their mouths or tell them what to do, so instead, engage them and ask their opinions about your products, features or services. Offer incentives for producing content, and encourage them to create content featuring your brand, or have them team up with you in creating new Instagram layouts for your brand.

Expand your conversation beyond social media, into email or even face-to-face meetings to strengthen the relationship. When influencers feel like partners, they’ll be strong advocates for your brand.

Success Stories of Brands Who Have Worked With Influencers

This Singapore-based restaurant invited influencers to meet for a free meal, in exchange for sharing images of the dishes with their followers on Instagram. By accompanying the posts with pricing information and availability, all of the posts received positive feedback from followers. 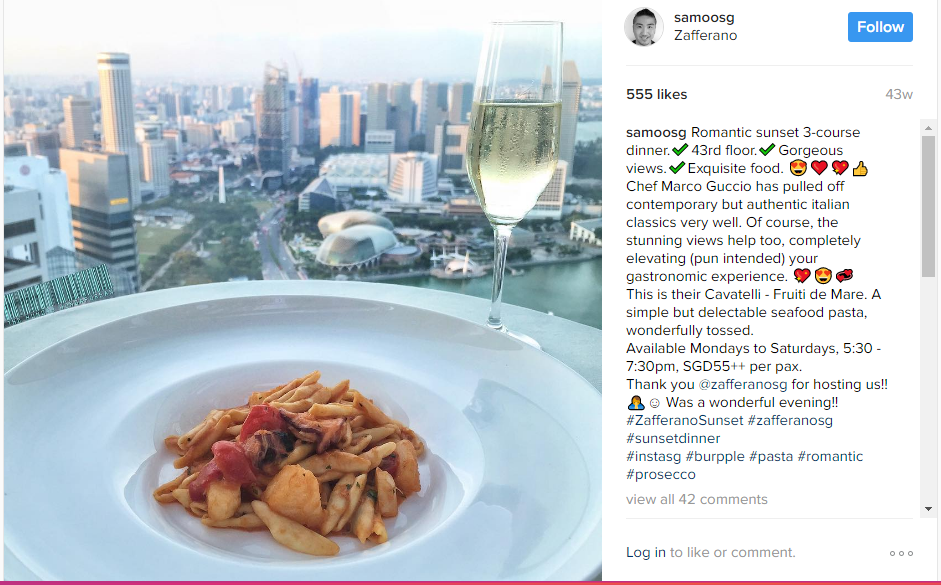 Although there were only eleven influencers in all, the restaurant achieved a combined reach of more than 65 thousand, with 8500 likes and 280 comments on Instagram.

Old Spice invited influencers to participate in a contest where users could draw a shape of a prize by running an exercise route and posting the image on social media. 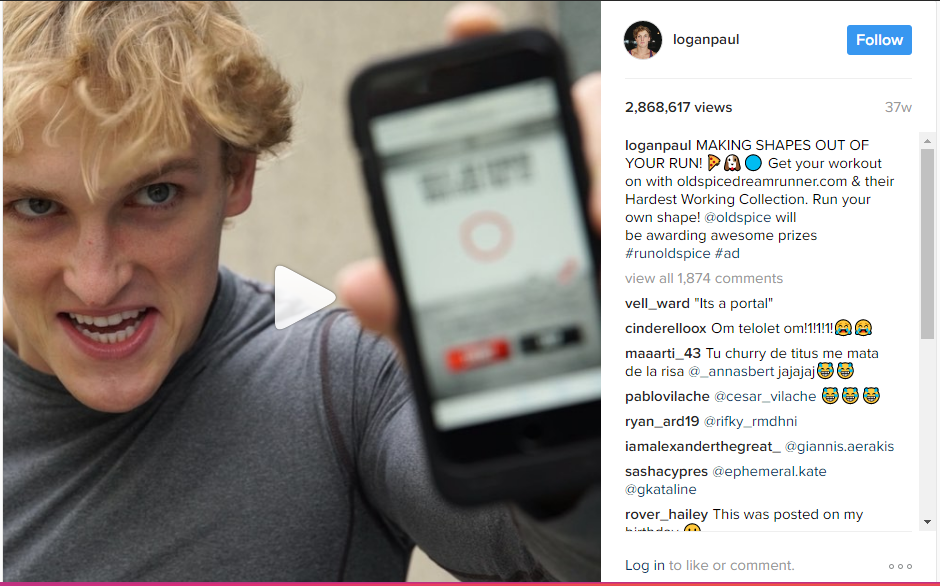 This generated enthusiasm among the contestants (influencers), and by offering a chance to win prizes for participating, more people became engaged with the brand.

The Complete Guide to Increasing Conversions Through Instagram Micro-Influencers is last modified on: 2019-09-18T11:30:35+00:00 by Admin
← 7 Content Marketing Tips for 2017 How the news feed Algorithms work on Instagram →